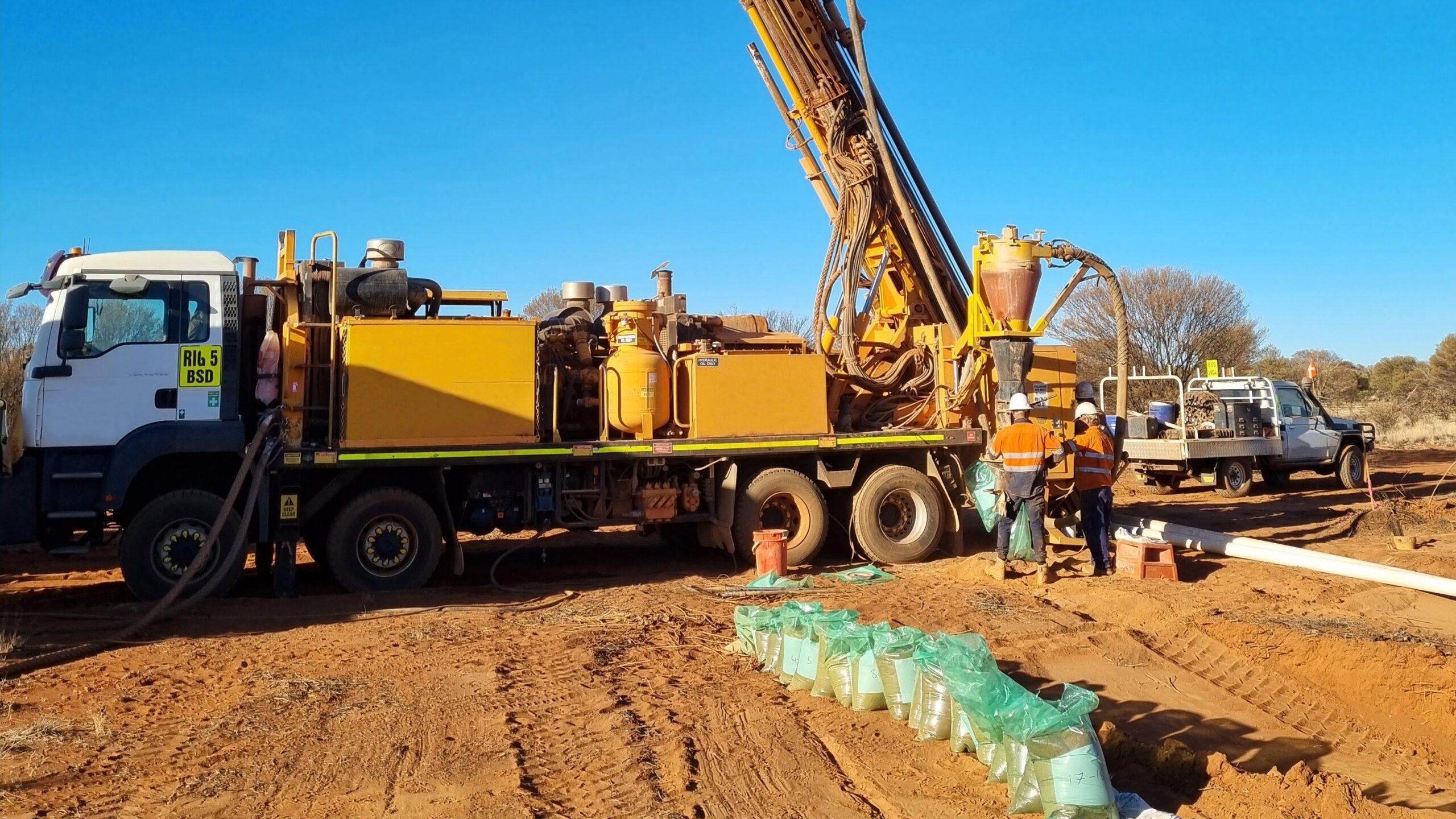 Side Well is a high-grade gold project in the heart of a multi-million-ounce field. Strategically located adjacent to Meekatharra in Western Australia, drilling is continuing to achieve outstanding results with an aggressive exploration program continuing at Mulga Bill, Ironbark and other prospects within the project.

The Side Well project covers a 26km strike extent of prospective, under-explored greenstone stratigraphy at Meekatharra. Historically the area has received very little attention from exploration companies, partly because of an outdated view that gold at Meekatharra was mainly hosted in the banded iron formation (BIF) units on the western side of the greenstone belt, and also because a thin layer of alluvial sheet wash covers the central part of the project area. This alluvial material obscures underlying gold mineralisation from detection by surface geochemistry.

About The Side Well Gold Project

Side Well tenement E51/1905 is a 48-block Exploration Licence covering an area of 132km2 immediately east and northeast of Meekatharra in the Murchison province. The project overlies the Meekatharra – Wydgee greenstone belt and includes upper greenschist-facies rocks of the Luke Creek and Mt Farmer groups. Within the project area lithologies comprised of ultramafics, basalts, banded iron formation and felsic to intermediate volcaniclastics are folded into a large regional syncline known as the Pollele syncline. Alluvium and lacustrine clays overlie the area.

Side Well is ideally located next to Meekatharra in WA, serviced by two highways and the town’s infrastructure. The project shares a boundary with Westgold Resources’ Paddy’s Flat operation, and the Bluebird mill is only 12km south of town. The Mulga Bill deposit is a short 10-minute drive from town.

Although the large, high-grade Mulga Bill deposit is Great Boulder’s primary focus there are several other current and conceptual gold prospects within the project. The most advanced of these is the Ironbark discovery east of Mulga Bill. Discovered by auger sampling in 2020 followed by AC and RC drilling, Ironbark is a near-surface orogenic gold deposit with potential to provide satellite mill feed to an eventual mining scenario.

The regional aeromagnetic image shown above clearly shows the iron-rich BIF and mafic units in red, striking northeast through Paddy’s Flat before wrapping around the fold nose of the Polelle Syncline and then down the eastern side of Side Well. This stratigraphy includes the Matilda and Ironbark prospects. These magnetic units have traditionally been the main targets for gold exploration in the Meekatharra area.

In the core of the syncline a package of felsic and intermediate volcanics and volcaniclastics host the Mulga Bill – Loaded Dog trend, a 6km-long zone of elevated gold and intense alteration with coincident pathfinder anomalism, chief of which is bismuth. Bismuth remains stable during weathering, and its correlation with gold at Mulga Bill makes it an ideal pathfinder for early-stage exploration. The Bi-Mo-Ag-Au-Cu association at Mulga Bill indicates a magmatic origin and, more specifically, an intermediate sulphidation epithermal system. There are no known direct analogues for this type of gold system in WA.

To the north of the syncline the magnetic image shows attenuation of the greenstone belt between two granite plutons. This deformation and a number of cross-cutting structures and smaller internal intrusive bodies provide a number of conceptual structural targets for gold mineralisation. Soil sampling and first-pass AC drilling in this area has generated a number of low-level multi-element anomalies, and these will be followed by with further drilling in the future.

Kalgoorlie-based prospector and explorer Scott Wilson was one of the first people to recognise that the Meekatharra greenstone belt continued beneath shallow soil cover north of Meekatharra in the 1980’s, after seeing a regional aeromagnetic map of the area produced by the Bureau of Mineral Resources. Scott subsequently pegged a series of exploration licences between Meekatharra and Andy well, an area in which he still maintains an interest more than 30 years later. He went on to strike joint venture agreements with a series of exploration companies, leading to the discovery of gold at Andy Well by WMC Resources and the first significant intersection at Mulga Bill by Dominion Mining.

Regional exploration has been conducted around Side Well by a number of companies over the past 30 years, including Dominion Mining (1992 to 1995), WMC Resources (1996-97), Accent Resources (2009) and Doray Minerals (2010 to 2016). Dominion was the first company to identify significant gold mineralisation in drilling with intersections such as 2m @ 1.67g/t Au and 4m @ 1.4g/t Au in regional RAB traverses [1].

Dominion Mining and WMC Resources explored the greenstone belt from Andy Well to Side Well during the 1990’s. Dominion discovered significant gold mineralisation at Side Well in 1993, including 26m @ 2.19g/t in hole HAR3015. WMC subsequently assumed ownership of Dominion’s project interest, and shortly afterwards WMC drilled the discovery holes at Andy Well. WMC eventually concluded that the project area did not meet their exploration criteria of a 6Moz discovery, commenting in their 1998 report that “potential for a near-surface WMC-sized position (e.g. 6Moz) was significantly downgraded. The potential for smaller, perhaps million ounce, positions remains significant.[2]” The decision by WMC to leave the area eventually led to the Andy Well project being picked up by Doray Minerals in joint venture with Scott Wilson.

Doray was successful in identifying high-grade gold in drilling at Matilda (3m @ 35.48g/t Au from 76m in hole MNAC0463) and then Mulga Bill where several significant hits in Air-Core (AC) and Reverse Circulation (RC) drilling included 10m @ 3.41g/t Au from 185m in SWRC006, 14m @ 5.30g/t Au from 86m in SWRC012 and 5m @ 6.69g/t Au from 110m in MNAC0454. In January 2013 Doray flew a heli-TEM survey over the project area which provided additional detail for their structural interpretation on the controls to mineralisation. After 2015, Doray’s exploration focus shifted closer to Andy Well as they experienced success at Gnaweeda, while the corporate focus shifted to the ramp-up of operations at Deflector, south of Yalgoo.

Great Boulder entered into a Joint Venture agreement with Scott Wilson’s Zebina Minerals Pty Ltd in 2020 and commenced drilling in August that year. Early target generation work by GBR in 2020 led to the first high-grade intersections at Mulga Bill, announced in early May 2021, and the discovery of the Ironbark and Loaded Dog prospects in late 2021.

Much of the Side Well area is covered by transported alluvium, rendering conventional soil sampling techniques unreliable. This partly explains why Mulga Bill remained vastly under-explored despite a number of mineralised drill intersections by previous explorers.

Mulga Bill is in a zone of deeper weathering, with the top-of-fresh rock surface varying from 90m to over 120m below surface. Gold in the regolith tends to be depleted and remobilised into a widespread amorphous blanket of anomalous supergene gold. These two factors present a challenge when targeting mineralisation in fresh rock.

Great Boulder was able to successfully target deeper mineralisation in the fresh rock using AC drilling to blade refusal, and assaying bottom-of-hole samples for a low-level multi-element suite. With help from renowned geochemist Dr Scott Halley the Company recognised an association between gold and the pathfinder elements bismuth, silver and molybdenum, and in some cases copper. By contouring these results prior to its first RC program in 2021 the Company was able to record a spectacular intersection of 6m @ 31.2g/t Au in its second RC hole.

Ongoing analysis of multi-element geochemistry indicates an intrusive-related origin for Mulga Bill, specifically an intermediate sulphidation epithermal system. There are no known analogues for this mineralisation style in WA.

In addition to using geochemistry to assist with drill targeting and map lithology and alteration patterns, Great Boulder also uses geophysics whenever possible as a targeting tool.

An electromagnetic (EM) survey flown by Doray in 2013 initially identified an unexplained corridor of increased conductivity at Mulga Bill. This was followed up by a detailed gravity survey over the entire project in early 2021 which generated a similar-sized anomaly in otherwise uniform lithologies, particularly over a 3km zone covering the central part of the Mulga Bill corridor.

An induced polarisation (IP) survey over Mulga Bill in April 2022 confirmed broad zones of disseminated sulphides broadly coincident with the mineralised trend as well as the conductive and gravity anomalies. The IP survey also partially resolved an elongate zone of increased resistivity immediately east of the chargeable IP anomaly.

Comparison of the geophysical data with drilling to date suggests an area on the eastern edge of the IP anomaly against the contact with the resistive zone is prospective for higher grades of gold mineralisation, and this is now the focus of drill targeting moving south.

Mulga Bill is the main priority target at Side Well. With widespread intense alteration and gold mineralisation over a 6km-long area, this is a company-making opportunity for Great Boulder with true million-ounce potential.

Mulga Bill is structurally complex, with high-grade vein sets arrayed on a number of different orientations within a broad north-south corridor. Gold mineralisation is associated with a broad envelope of silica-sericite alteration, with an unusual pathfinder element association of bismuth-silver-molybdenum-copper indicative of an intrusive-related gold system. Analysis of GBR’s multi-element geochemical data by Dr Scott Halley suggests Mulga Bill has the hallmarks of an intermediate sulphidation epithermal, a style of gold deposit with no analogues in WA.

Immediately adjacent to high-grade gold structures in the northern half of Mulga Bill a broad subvertical zone of copper-silver-gold mineralisation has been identified. While gold remains the main focus the copper zone will also be tested with ongoing drilling programs.

Preliminary metallurgical testing of one sample of Mulga Bill was completed in early 2022. This study concluded that gold recoveries of 99.7% were possible using a 150um grind size using 300ppm NaCN over 48 hours. Gravity gold recovery was very high at 62.1%, and the residual tails grade was only 0.1g/t Au.

Loaded Dog is the second prospect area within the overall 6km footprint of Mulga Bill. This 6km trend is sometimes referred to as the Mulga Bill – Loaded Dog corridor.

Other auger anomalies of similar tenor near Ironbark are yet to be tested.

Ironbark appears to be an orogenic gold system with mineralisation on contacts between mafic and ultramafic rocks on a north-northeast strike.

At the Matilda prospect, Doray’s high-grade AC hit of 3m @ 35.48g/t Au is yet to be followed up. An attempt to drill AC holes along strike of Matilda in 2021 was unsuccessful due to difficulty penetrating a thick clay zone, and this program remains incomplete.